While still students, Pete and Jim made their first trip to the Tucson Gem and Mineral Show. Here they saw an opportunity to reach a larger market for their mineral and fossil specimens. Reaching that market might allow them to continue pursuing their passion for collecting, preparing, and displaying geologic and paleontologic specimens. The following year, in 1974, they returned as Black Hills Minerals and first time exhibitors to the Tucson Show. In the ensuing years, Black Hills Institute owners and staff have returned each February as one of the major fossil dealers and exhibitors at the Tucson Gem, Mineral and Fossil Show.

Peter’s brother, Neal, and a mineralogist, Robert (Bob) Farrar, began working with Peter and Jim, in 1973, while they were students at the South Dakota School of Mines. Eventually both Neal and Bob became partners in, and co-owners of the Institute, Neal upon graduation in 1978 and Bob in 1990. Jim Honert left for employment with Shell Oil in 1981.

These four young men brought their individual collections of fossils and minerals into the new business. They had each collected specimens in their area of interest since early childhood. Together they collected and assembled an extensive collection of fossils and minerals. This collection became the nucleus of what has become one of the world’s finest and most comprehensive research collections of mineral and fossil specimens. For the past thirty-plus years, scientists from North America, Europe and Asia have traveled to Hill City to study specimens in the Institute’s collection.

In 1978, the company reorganized and incorporated as the Black Hills Institute of Geological Research, Inc. This name change was made to more adequately describe our interests in all aspects of geology, not only mineralogy. The following year, the Institute purchased and moved into its present headquarters in Hill City. Originally constructed by the Works Project Administration (WPA) in 1938, the building served as Hill City’s Auditorium and American Legion Hall for nearly 40 years. With more room for storage, preparation facilities and office personnel, the company’s inventory and staff expanded.

As the years passed, the Institute staff earned reputations throughout the region, as expert collectors and preparators of fossils . A large base of support for the business developed as numerous ranchers gave the Institute permission to collect on their property. The growth and success of this unique business is due in large part to the support of these area landowners as well as that of the residents of Hill City.

In 1978 we met Ruth Mason, the owner of a ranch in north central South Dakota. That meeting changed the course of the Institute’s history. As a child, Ruth had discovered on the ranch, a large dinosaur bone-bed containing literally tens of thousands of bones. Over sixty years she made numerous attempts to locate someone who would identify and take an interest in collecting the bones.

The Institute was definitely interested and excavation began almost immediately. It was now possible for the Institute to offer complete dinosaur skeletons and skulls to its clients. For more than a decade, Institute staff, with dozens of volunteers, collected bones of the duckbilled dinosaur, Edmontosaurus annectens, from the Ruth Mason Dinosaur Quarry. Twenty years later, nearly ten thousand bones had been collected and catalogued and ten complete dinosaur skeletons had been mounted for exhibit in European, Japanese, and American museums.

Over the years, Black Hills Institute has acquired a worldwide reputation for excellence and scientific accuracy in collecting, preparing and mounting paleontological specimens. Exhibits featuring specimens collected and prepared by Institute staff have been purchased for display in the world’s most prestigious museums. The Smithsonian Institution in Washington, DC; the Royal Tyrrell Museum of Paleontology in Drumheller, Alberta; the Natural History Museum in Leiden; Japan’s National Science Museum in Tokyo; and museums in the U. S. and other countries such as Spain, Italy, Germany, Switzerland, Australia, and Peru, have specimens and exhibits prepared by Institute staff. The Institute prepared and mounted a large Lower Cretaceous carniverous dinosaur, an Acrocanthosaurus atokensis now on display at the North Carolina State Museum of Natural Sciences (Raleigh, North Carolina).

In 1990, the Institute entered an exciting new era with the discovery, collection, preparation, and study of the largest and most complete Tyrannosaurus rex excavated to date – SUE. Though Institute staff invested two years in beginning the preparation of her skeleton, SUE did not remain at the Institute. In May of 1992, dozens of Federal agents descended upon the Institute and siezed the dinosaur, claiming it on behalf of the United States. After a lengthy legal battle, her still largely unprepared skeleton was sold at auction by the United States Government in 1997 as trustee for the landowner from whose land she was excavated. She was purchased by the Field Museum of Natural History in Chicago, Illinois with financial help from Disney World, the McDonald Corporation and other investors. Her now-famous skeleton is currently exhibited at the Field Museum. 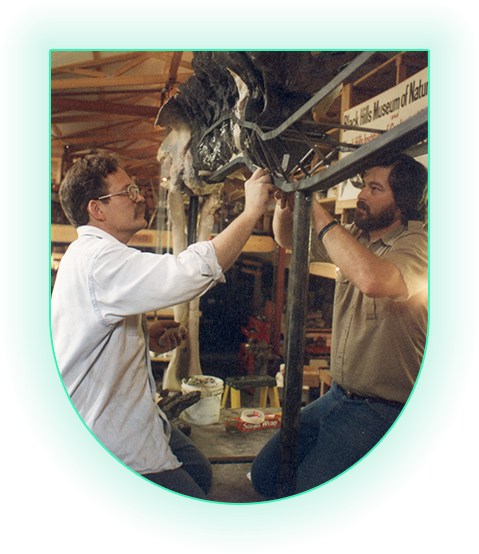 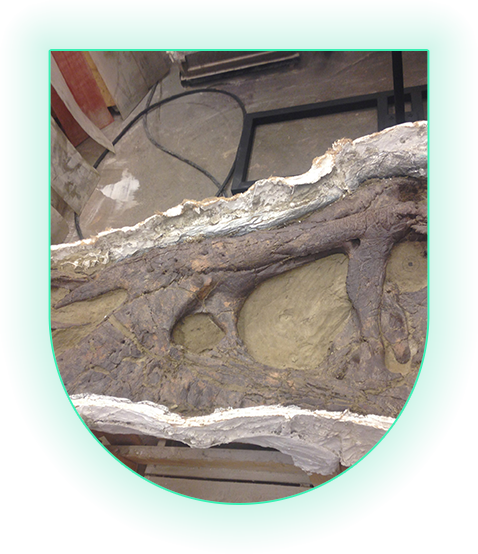 Two years after SUE’s discovery, the Institute excavated another Tyrannosaurus rex skeleton named STAN™. STAN™’s fossil skeleton is on exhibit in the Museum at Black Hills Institute, in Hill City. His skeleton also did a year-long tour of major Japanese cities in 1995. Institute staff have also excavated additional Tyrannosaurus rex skeletons of varying degrees of completeness including DUFFY, STEVEN, FOXY LADY, and WYREX.

By the end of the 1990’s, the Institute had already excavated and collected more T. rex skeletal material than any other facility in the world. Institute President and founder, Peter Larson began an in-depth study of not only this material, but also the major portion of other T. rex material collected by other institutions and individuals. As a result, Peter has become one of the world’s most widely quoted and well respected researchers and authors about the anatomy and lifestyle of Tyrannosaurus rex and other carnivorous dinosaurs. Academic, private professional, and amateur scientists come to the Institute to study T. rex as well as the many other vertebrate and invertebrate fossil specimens acquired over the years.

With the collection of ever more Tyrannosaurus fossil material, Institute owners discovered a new business opportunity. Though Tyrannosaurus rex is the world’s best known dinosaur, skeletons of any completeness are quite rare. Yet dinosaur researchers needed access to skeletal material for study, and museums wanted T. rex skulls and skeletons for display. Therefore, Institute staff began perfecting techniques and experimenting with materials for producing scientifically accurate and minutely detailed cast replicas of each bone and tooth as well as fully mounted skulls and skeletons of this very popular dinosaur. Once again, the Institute changed focus and added a new dimension to its work.

Now, not only Tyrannosaurus rex but other rare and one of a kind fossil specimens are prepared, molded and cast with the reproductions made available for purchase by the Institute. Our magnificent cast replicas are displayed in museums and science centers, zoos and aquariums and even shopping centers and private homes, throughout the world.

The collection, preparation and study of ammonites, an abundant fossil marine invertebrate, is another aspect of paleontology for which the Institute has gained attention and acclaim. Neal Larson is known as one of the world’s premier scientists in the study and identification of these fascinating animals. The first edition of The Ammonites and other Cephalopods of the Western Interior Seaway, was published in 1997, with Neal as primary author. Reviewers insist that the book is considered an essential text for researchers, as well as an excellent and easy to use field guide for the amateur and professional cephalopod collector. A hard copy edition was published in 1999. Neal published his second book on ammonites in 1999. This ‘pocket’ book, Discovering the Mysterious Ammonites, is geared toward introducing the lay reader to ammonites.

Another area of specialized research for the Institute has been mineralogy. Robert Farrar brings to the company his intense interest and expertise in this field of study. Under his guidance, the Institute has acquired numerous exhibit quality and many rare mineral specimens for its collection. The mineral collection has brought the Institute to the attention of mineralogists from around the world. Bob and Pete have collaborated with German, Canadian and American researchers, especially in the study of pegmatite phosphate minerals that are native to the Black Hills of South Dakota.

The Institute is open year round and visitors are always welcome to explore the museum and the Everything Prehistoric Gift Shop. Our retail store has a large selection of geological materials, toys, books and videos, and also provides mail order sevices. Stop in and see what is new and exciting in the fossil world at the Black Hills Institute of Geological Research, 117 Main Street in Hill City, South Dakota.